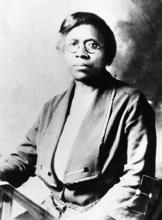 Dr. Matilda Evans was born in Aiken County, South Carolina and was the eldest of three children. She grew up during the Post-Reconstruction era when there was marked racial violence, black exploitation, and white supremacy. As a young woman, Evans worked in the school’s garden and cotton fields. Martha Schofield was a mentor and benefactor for Matilda Evans in terms of schooling. Evans was a very intelligent and diligent girl. Schofield observed these characteristics in Matilda and funded for her to go to Oberlin College. After graduating college in 1893, Evans received a one-year teaching position at Haines Institute and finally in 1893 she decided to pursue a medical training. Schofield intervened again and helped Matilda to further her education by entering Woman’s Medical College in Philadelphia. In 1897 Matilda graduated having specialized in obstetrics, surgery, pediatrics, gynecology, and hygiene. In this experience another white benefactor named Alfred Jones helped to pay for the expenses.  In 1900, Evans was one of 4 graduates of Woman’s Medical College in Philadelphia to practice in Southern States. Dr. Evans moved to Columbia, South Carolina and practiced medicine there.

Dr. Matilda Evans was a very significant figure in expanding health care opportunities for black families especially in Jim Crow South. She used her elevated position to fight for black health and educational welfare that  she believed to be a citizenship right. Evans was able to establish two hospitals and a nursing training program at the beginning of the twentieth century.  In 1916, she advocated for better healthcare delivery and also created a journal named the Negro Health Association of South Carolina. When the Great depression began, she began a free-clinic movement and inspired blacks to protest for healthcare citizenship rights.

She was the only black woman physician in the country to serve as president for the state medical association, the Palmetto Medical Association. She was also one of the regional vice presidents of the National Medical Association. She always reached out to the black community using the resources she could get a hold of. She in one instance asked the State Board of Health of South Carolina to give her free vaccines to immunize black schoolchildren in Columbia.

Several white counterparts supported Evans and thus she never hesitated to implement them in her activities. She founded Taylor Lane Hospital and allowed only white physicians to attend to the black patients in the facility. She treated many low-income black patients and was able to excuse their medical bills due to other wealthy white women whom she treated as well. She obtained financial and volunteer aid from white businessmen, white women clients, and young white physicians. She even contributed with her own personal funds.

In the latter half of Evans medical career, she founded several health organizations, wrote pamphlets, and edited journals. She also adopted 7 children and became a foster parent. She opened up swimming pools for young underprivileged and undernourished boys. She continued to fight for equality in black healthcare access and opportunities. She gathered up women, men and children and organized the Columbia Clinic Association. The Columbia Clinic Association consisted of three clubs: one for women, another for men, and the other for girls. Dr. Matilda Evans never stopped resisting black oppression. She continuously acknowledged and persuaded blacks to fight for and obtain the health that ultimately determined their longevity.

The Corporeal and Ocular Veil: Dr. Matilda A. Evans (1872-1935) and Complexity of Southern History