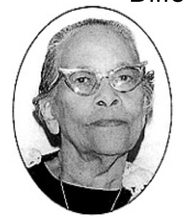 Mabel Keaton Staupers was a Caribbean-American registered nurse who in 1903 immigrated to the United States with her parents at the impressionable age of 13.  Characterized as a visionary, courageous and determined leader, she is most revered for the instrumental role that she undertook in eliminating racial barriers in the Army and Navy Nurse Corp and civilian nursing institutions during a time in which the use of segregation methodologies prevailed in U.S. History.  In 1917, she graduated from Freedmen’s Hospital School of Nursing which is currently Howard University College of Nursing today.  Immediately upon graduation, she became a private duty nurse wherein her scope of practice extended from being a surveyor of health to becoming the secretary for the Harlem Tuberculosis Committee.

Early on in her nursing career, Mrs. Staupers was faced with the harsh realities of racial discrimination which promulgated her to realize how important multi-disciplinary collaboration would be when attempting to address the dynamic environmental and social issues that plagued African Americans during WWII.  One example of the many instances whereas Staupers demonstrated her “Can Do Spirit” occurred when she joined the black physicians Louis T. Wright and James Wilson in 1920, to establish the Booker T. Washington Sanitarium in Harlem.  The primary purpose of the Sanitarium was to meet the needs of Black Americans with Tuberculosis (TB).  Additionally, she served as the Director for the Sanitarium from 1920-1921.

In 1922, her deep and genuine concerns related to effectively addressing the health care needs of the citizens of Harlem led to further investigation of possible phenomena underpinnings.  Research findings set the stage for the city of New York to initiate the Harlem Committee of the New York Tuberculosis and Health Association.  Staupers held her position as executive secretary for the following twelve years.  This position of authority afforded her the additional platform to advocate for and obtain available resources for Harlem residents affected by the disease.

From 1934-1946, she was appointed as the Secretary of the National Association of Colored Graduate Nurses (NACGN).  Staupers effectively used this venue to organize local and state nursing organizations.  In 1945, all of her perseverance and hard work paid dividends as evidenced by the full integration of the Armed Forces.  Moreover, the pace was also set for full integration of Black nurses into the American Nurses Association (ANA) which came into fluition in 1949.  This momentus breakthrough solidified the fact that the previously wedge of existing racial barriers related to African American nurses and lack of professional nursing organizations membership access had been dismantled.   As President of the NACGN, Staupers led the efforts to disbanding the NACGN organization due to the demonstrated evidence of its primary mission being completed.

In conclusion, Mabel Keaton Staupers leadership led to the recognition, status and acceptance of African American nurses into the broader context of American nursing as a whole.  She authored the renowned  book, “No Time for Prejudice”  which annotated the free-will merger of the colored graduate nurses and the ANA collaborative relations across the continuum of national nursing organizations for the common good of the profession and the science across the United States.  Mrs. Staupers received numerous awards related to her racial equality advocacy efforts.  i.e. Springan Medal from the NAACP in 1951 and ANA Hall of Fame Inductee in 1996 to name a few.  She lived in Washington, D.C. from 1970 until her passing on November 29, 1989.  But, her legacy of tireless contributions to the profession of nursing continues to live on today.