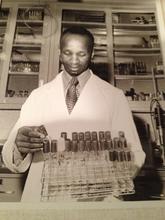 An Interview with Eugene Moss Jr.

My grandfather (Papa) grew up East Orange, New Jersey at 37 Edgenton Terrace.  He lived in that house for 4-5 years before moving down the street because it was a nicer, bigger home.  At 15 Edgenton Terrace there was a wooden stove (pot belly) that kept the house really warm.  The Peninston’s mother (next door neighbor) from Bermuda, would come over, and talk and share stories with his mother daily.  My grandfather remembers she was a heavyset woman that would bring over nice peppermints.  It was my grandfather’s responsibility to keep the wooden stove in the kitchen running during the day when he was home.  He would get the wood from the wood boxes from The Eagle, which was the local grocery store.  Mr. Ferrer was in charge of store, and would leave boxes of them in the back.  There was a college down the road from where my grandfather grew up called Upsala College where my grandfather and his other 3 siblings would go and fly kites.  He recalls beautiful pear and apple trees and a racist grounds keeper that did not want black people on the property.  The grounds keeper often chased chase them away.  When my grandfather and his brother Leon were old enough they bought a 1929 Ford for 25 dollars.  Leon had his license, but he was dangerous behind the wheel with clutch and brake and would consequently break the axle all the time.  My grandfather and him use to go on long drives to Echo Lakes, in New York State to get away and relax for the weekend. My grandfather became really interested in tennis and joined a black tennis club, where many black families use to convene, share stories and have a good time.  The Inge Brothers, were the primary physicians for many of the black families where my grandfather grew up and he would often see them playing tennis at the club.

Papa’s father (Eugene Sr.) was from True Blue Crooked Island, Bahamas and worked as a fisherman and carpenter before he moved to Opa Laka, Florida (Outside of Miami) where he married papa’s mom.  Papa recalled his father’s stories about the KKK and how they would come into neighborhoods and torment black people.  In order to provide a safer life for his family they moved to New Jersey.  A friend of my great grandfather spoke to him about a job in Newark at the Brooks Brother’s factory doing molding and welding with lead.  My great grandfather made seals for bags to be shipped over seas to be used during World War Two.  When he wasn’t doing that he was a shipping clerk.  In order to keep my grandfather and his siblings out of trouble, especially during the summer, my great grandfather made huge wagons, with big boxes in the back.  Papa would take the wood he found in this wagon back to the house and cut it to be used for the furnace in the winter.  He would only go down certain streets because many of the white children would yell terrible things at my grandfather and his brothers and sister. Papa had a slope in the back yard of his house with a nice big pear tree.  One day during the summer, while climbing the tree he slipped and had a serious cut from a rusty nail with, “blood was coming out like pasta.”  He remembers no EMS, or doctor was called even though the cut was deep and most likely needed stitches.  His mother, who at the time stayed home and was raising Papa used bandages and pressure for hours to make the bleeding stop.

There was little racism in the schools, and they were integrated at this point in my grandfather’s life.  In most of his classes he was the only black person.  One particular discouraging moment my grandfather experienced was in high school with algebra 2.  After school Papa went to his teacher for help with problems before a test, however instead of going over the problems the teacher asked him if he could come daily to her house to do chores and help out around the house.  After an hour of talking about what the work would be, he left without going over a single problem and consequently did poorly on the exam.

Right after high school Papa went into the military.  He started with the end of WWII in 1946.  He received letters in the mail, saying that he was 1A classified, which means he was most eligible to serve in the military.  His father was exempted from service because of both his age and the fact that he had a family.  Papa’s friend Baxter signed up for the marines early, however my grandfather was too late and was placed in the army.  He started at camp Kilmer in NJ, and was then shipped off to Fort Dix for basic training.  While there he actually loved it.  During weekends, he previously worked at medical lab in Newark taking cultures.  The army recognized his medical experience and sent him to the medical corps in Texas.  He was the only black person from Fort Dix to be sent to the medical tech training camp in Texas.   Was sent to the medical core (Texas).  –Only black person that

When his friends and he arrived by train in Texas, they went for one last dinner, however once seated, the waiter told him that the restaurant does not serve colored people.  On the base, he was separated to the black section from his other white friends who he never saw again.  About 8 months into his training he received a special message from government saying that all employees will be honorably discharged as World War Two had ended.

With the GI Bill, Papa applied to Lincoln College in Pennsylvania.  A medical doctor had lots of pull at Lincoln that was a financial supporter of the school and helped Papa gain admission to the school.  In 1947 he started College.  The last year of school, the financial officer said he had a balance of $140 to pay before he could graduate.  Papa took the bus from Pennsylvania back home to talk to his parents about his financial situation. His father gave him a terrible time, and told Papa that he was not in favor of him going to school in the first place, and did not have the money to finance his last semester at school.  Thankfully, he knew a white man that papa knew who, would tip nicely when he worked at the drug store during high school.  Papa wrote to him asking for the money, and he responded quickly sending $500, which at the time as a lot of money.

Papa received another call during his senior year in college from the military that length of time he served was not long enough and wanted him back in the military for another 10 months. Papa went back into the medical corps and recalled being very scared that he would be put on the battlefield. Thankfully, he was put into a research group going to Germany.  The corps at this time had fully desegregated, yet Europeans were very intrigued to see black soldiers.  They would often look for tails on my grandfather.  Papa would enjoy going to parties with his new friends in the medical research group.  He joined the track team with the corps and would travel throughout Europe running, sight seeing and doing research.  He found himself in and out of hospitals and was the only black person to be doing this at the time.  He worked mainly in the bacteriological phase of projects and was actually awarded graduate course credit.

Papa had a career at Schering Plough doing microbiology research after he was dismissed from the military and finished graduate school.  He wanted to become heavily involved with computers, graphs and all the data however with the rise in technology he became very overwhelmed by the end of his career.  He would go to national conferences around the country, and would come back and report how he believes the company could become more efficient or produce better products.  By the end of his career however, he did not want to attend these meetings because he didn’t know how to graph the data on the computer and how to analyze all the data that was coming in. He enjoyed working with one phase of what one chemist was going and expanding upon it to create a more in depth report.