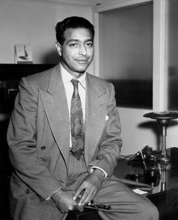 Clarence Sumner Greene was born on December 26, 1901 in Washington, D.C. After graduating from Dunbar High School in 1920, he moved to live with his aunt. He was strongly influenced towards medicine during that time by his uncle and great uncle whom were both physicians and leading medical figures. Deciding first to go to dental school, he did two years at the University of Pennsylvania and then continued onto their dental school, graduations with a D.D.S. degree in 1926. But he quickly realized that he wasn’t satisfied with dentistry and went to Harvard University for a 2 year premedical training program (from 1927-29). In 1930, Greene interned in Cleveland City Hospital. Then he returned to University of Pennsylvania and earned a Bachelor of Arts degree (1932). Then in 1936, he got his M.D. at the College of Medicine at Howard University. From 1937 to 1939 Dr. Greene did a residency in Douglass Hospital in Philadelphia under Dr. John P. Turner. Then he moved to Freedmen’s Hospital in Washington D.C. for two years and worked as an assistant resident under Dr. Edward L. Howes, during which time he was also on Howard’s medical faculty as an instructor of physiology, anatomy and surgery.

He was a diplomat of the American Board of Surgery in 1943. That same year he was appointed assistant professor of surgery at Howard. He is also the first Howard graduate and Howard trained surgeon to pass the latter board.

When it became apparent that Howard needed a division of neurosurgery, Greene decided to travel to Europe to receive even more schooling at the Montreal Neurological Institute of McGill University. He was giving excellent reviews after his two-year residency in Montreal and returned to Howard as the chief of its newly established Division of Neurosurgery with the rank of assistant professor. His major contribution was pioneering many of Freedmen’s Hospital’s surgical procedures: intracranial aneurysms, brain tumors, herniated intervertebral discs and sympathectomies for hypertension as well as other routine diagnostic procedures.

In 1953, he became the first African American to be appointed diplomat of the American Board of Neurosurgery. In 1955, he was named head of the Department of Surgery. In 1958, through Dr. Greene’s efforts, a post-operative recovery and intensive care unit was established and named after him.