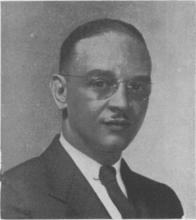 William H. Sinkler was born on December 24, 1906 in Summerville, South Carolina. He received his academic degree from Lincoln University (Pa) in 1928 and his M.D. from Howard University (D.C.) in 1932. Throughout his education, Sinkler was a member of various fraternities, including the Kappa Pi Honorary Society while a student at Howard University Medical School.

After graduation, Dr. Sinkler moved to St. Louis, Missouri, where he served as a junior intern, assistant resident in surgery, and resident surgeon. In January of 1938, Dr. Sinkler was appointed as consultant in chest surgery at Koch Hospital, the first member of his racial group to be honored. In 1941, Dr. Sinkler was made medical director of the Homer G. Phillips Hospital, where he was an outstanding hospital administrator, distinguished surgeon, and Assistant Professor of Surgery in the Medical School of Washington University.

Dr. Sinkler provided various services towards the provision of internships and residencies for the training of physicians and surgeons in the Homer G. Phillips Hospital. The hospital became one of the most helpful American educational agencies in the medical field.

Dr. Sinkler was recognized for many accomplishments; the one he cherished most was the Distinguished Service Alumni Award from Howard University (1959). Aside from his excellence in the field of medicine, Dr. Sinkler was active in many social and political organizations in St. Louis. Dr. Sinkler died of a heart attack on September 22, 1960 at the age of fifty-four.

Dr. Sinkler is remembered for the tremendous sacrifices he made in order to provide blacks with top-flight postgraduate training. The sacrifices he made were not for his own personal gain, but for the greater good of providing top quality care for black people. Dr. Sinkler believed that treating patients was a privilege, and that a physician has the responsibility to treat patients not only with maximum use of physical and intellectual capacity, but also with dignity, empathy, and respect.