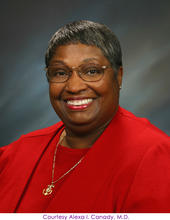 Alexa Canady was born on November 7th, 1950 in Lansing, Michigan to a well educated family. Her father was a dentist and her mother was a teacher. She was always encouraged to excell in school and to never lose hope in pursuing her education. The encouragement she recieved from her family truly aided her to become the best doctor she could possibly be, because it helped her while she was contemplating dropping out of school while a mathematics major. Even while attending a predominantly white institution (PWI) in a post-segregational era, she excelled at the top of her class and graduated from the University of Michigan with a bachelor of science in Zoology.

After attending a summer medical program for minority students after her junior year of college, Canady became inspired by the magic of medicine. She applied to medical school soon after, and graduated from the University of Michigan College of Medicine in 1975 cum laude. Regardless of the credentials she had, some of which were much higher than her fellow white co-workers, she still faced discrimination and racism in the workplace. In some of her interviews, she has quoted the verbal discrimination she endured, espescially during her surgical internship at Yale-New Haven Hospital. Canady recalls that during her first day of residency, one of the hospitals top administators said, “Oh, you must be our new equal oppurtunity package.” This type of verbal discriminiation is only one example of the oppression she endured on a daily basis. Regardless of it, she still rose up and became the first African-American woman neurosurgeon in the United States.

After she completed her internship, Canady moved to the University of Minnesota and became a resident at the university’s department of neurosurgery. She finished her residency in 1981, and officially began her medcal career. After she declared neurosugery as her specialty, she decided to specialize in pediatric neurosurgery.

While excelling in her specialty, Canady advanced in her surgical technique, and invented a programmable antisphon shut to treat hydrocephalus, which an abnormal acculumation of fluid in the brain. Throughout her career, she has been promoted countless times due to her talent. She later on became the Chief of Neurosurgery at the Children’s Hospital in Detriot, Michigan in 1987.

Even though Canady came from a more priveleged family than most African-Americans, she still experienced subjugation and racism throughout her and education and career. Even through all she obstacles, she faced she still became more successful than most of her co-workers through dedication and perserverance. She is currently 65 years old and has not retired yet. She currently works at Sacred Heart Medical Group in Pensacola, Florida as a pedriatric neurosurgeon.

“If you want to be something, you have to percieve that something is possible” - Alexa Canady