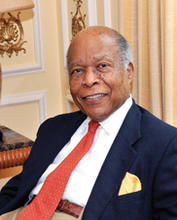 Dr. Louis Wade Sullivan is a renowned doctor, medical school administrator, and department chair for the government. Growing up in the Jim Crow South, Sullivan face many difficulties to get all the way to medical school and eventually the White House. However, he did not let difficulty hinder his success.

Once he received his medical degree at Boston University, he went to Harvard University’s Thorndike Laboratory to do research. being on the tip of frontier level research, Sullivan soon left to become a department head of hematology back at Boston University. After a few years, he had a calling to go back to his alma mater, Morehouse College, to start a medical school. With current president Hugh Gloster, he became the dean of the new Medical School breaking boundaries for students of color and beyond. After his tough yet successful time at Morehouse School of medicine, he was asked to serve as the Secretary of Health and Human Services during the Bush administration.

During his time as the Secretary of Health and Human Services, Sullivan worked for the diversity of the government, appointing many female and minority positions within his board. Addtionally he started the Healthy People Report to address health disparities in this country and make suggestions as to how we could improve the overall health of all Americans. Once his job as secretary was finisehed, he moved bakc to Atlanta as the president emeritus of Morehouse and still works in helath disparities today.

Breaking Ground: My Life in Medicine