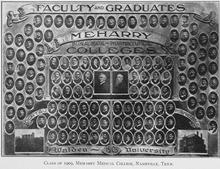 Originally organized as the Medical Department of Central Tennessee College in 1876, Meharry Medical College was the first medical school in the South offering admittance to African-American students. It was the second medical school for African-American students overall behind Howard Medical School in Washington, D.C. The institution was significant, because it catered to colored students. Meharry “came in response to a definite need. It appealed to a limited clientele. Money was not the motive. The teachers were able, earnest and enthusiastic. Thus Meharry was different” (Roman 39). Boasting affluent faculty that were both Black and White, Meharry was for Black male and female students—specifically those in the South who could not afford to go to northern medical schools or were not able to attend those in the north because of their “race”.

Meharry’s roots begin with the Central Tennessee College in Nashville. Established in 1866, Central Tennessee College was founded by the Methodist Freedmen’s Aid Society, and subsequently in 1876 a medical department was added named in honor of the Meharry brothers. The story of the Meharry brothers stretches back four decades prior. In the 1820s, Samuel Meharry, sixteen years old, was hauling a wagon of salt through Kentucky when his wagon slid off the road into a ditch. Searching for help, Meharry came upon a cabin, home to recently freed slaves. Risking their freedom they provided young Meharry with shelter and food for the night. The next morning, Meharry, unable to pay them for their good deed is quoted as saying “I have no money now, but, when I am able, I shall do something for your race.” And that he did. Forty years later, Meharry was involved in the organization of the Freedmen’s Aid Society (1866) whose intent was “to elevate former slaves, intellectually and morally”. Living by these words, and keeping his promise, Samuel Meharry and his four brothers “pledged their support to Central Tennessee College’s emerging medical education program. With $30,000 in cash and real property, the Meharry brothers repaid the black family’s Act of Kindness with one of their own” (Meharry Medical College).

The first president and dean of Meharry Medical College was Dr. George Whipple Hubbard. Hubbard, along with Methodist cleric John Braden, established the Medical Department of Central Tennessee College in 1876. In 1878, a course was established for nurses, a Dental Department was added in 1886, and a Pharmacy Department in 1889. As dean, Hubbard was very wise about the finances of the institution and worked diligently to obtain hospital privileges for his students, because at the time, no hospital was at Meharry. Continuing with the concept of improving medical school preparations, by “1900, both Meharry and Howard had adopted the admission procedures of the Association of American Medical Colleges which, which required that each student either possess a high school diploma or pass an examination” (Ward 18). In 1900 the name of the institution would change to “Meharry Medical College of Walden University” and later evolved to “Meharry Medical College”.

In the late 1800s, Meharry was “one of over four hundred medical colleges in the United States” (Roman 39), but this changed after the release of the Flexner Report. Published by Abraham Flexner in 1910, this report was a detailed account of all the medical schools in the country. Flexner graded and critiqued each institution, gave an analysis of each institution and suggested whether the doors should even remain open. With regards to Meharry, Flexner believed it was “the most creditable institution” and that “the upbuilding of…Meharry will profit the nation” (Flexner). With Flexner’s backing, Meharry was able to continue admittance, but more importantly, the institution received the funding that it desperately needed to upgrade facilities and improve the quality of education for the African-American students. In 1915, the George W. Hubbard Hospital Association raised funds to erect Hubbard Hospital in Nashville. This association was made up of wives, daughters, and sisters of Meharry faculty and they raised money by soliciting donations. Upon the opening of Hubbard Hospital, Meharry Medical College became the first medical school in the South to offer 4 years of training” (Wayne J. Riley).

Meharry, one of only two medical schools to survive past the 1920s, lives on. Today, Meharry is the largest private historically black institution in US whose sole purpose is to educate healthcare professionals and scientists.