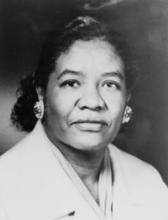 Dorothy L. Brown was born in Philadelphia, Pennsylvania on January 7, 1919. Dr. Brown was placed in the Troy Orphanage in Troy, New York at five months of age where she remained until the age of twelve years. Following her primary and secondary education in the public schools of Troy, she enrolled at Bennett College and received an A.B. degree in 1941. Her first employment after college was at the Rochester Army Ordnance Department as an inspector. In 1944 Dorothy Brown entered Meharry Medical College where she received the M.D. degree in 1948 and served a one-year internship at Harlem Hospital. Dr. Brown completed a five-year residency in general surgery at Meharry and Hubbard Hospital. In 1959, She became the first black female surgeon to become a fellow of the American College of Surgeons.

Dr. Brown entered “solo” practice in Nashville and survived the vicissitudes usually faced by both blacks and women in a specialty overwhelmingly dominated by white men. She excelled and subsequently built her own office building in the inner city across from Tennessee State University. For twenty-four years (1959-1983) she was the chief of surgery and educational director at Riverside Hospital and attending surgeon at Nashville Memorial and Metro General Hospital.

Dr. Brown was a life member of the NAACP and a trustee of Bennett College and Philander Smith University. In 1966, Dr. Brown was elected to the state legislature where she served for one term as a representative of the Fifth District. During her productive tenure as the first black woman elected to the Tennessee legislature, she espoused many causes and introduced legislation shunned by her male colleagues. In 1967, she was appointed to the Southern Regional Education Board and served on the Advisory Committee of the Tennessee Prison Board. Dr. Brown returned to Troy, New York in 1972 to receive an Honorary Doctor of Science (D.Sc.) degree from Russell Sage College.

Dr. Brown held membership or has been honored since 1959 by more than 100 organizations and institutions. She has been proclaimed “Citizen of the Year,” “Woman of the Year,” and honorary mayor of several cities. She has received keys to cities, innumerable certificates of appreciation, has been awarded medallions, and has been given testimonials, and days of recognition have been names for her. Dr. Brown held membership in the Southeastern Surgical Congress, the Nashville Academy of Medicine, and the American Medical Women’s Association. In 1982, Dr. Brown was appointed as a consultant to the National Heart-Lung-Blood Advisory Council. Dr. Brown was also a clinical professor of surgery at the Meharry Medical College.