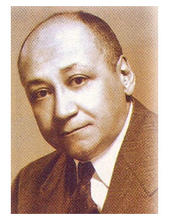 Dr. Louis Tompkins Wright (1891-1952), the outstanding African American surgeon, leader and activist was born July 23, 1891 in Georgia. Louis came from a family of medical professionals. His father, Ceah K. Wright (1854-1895), was both a physician and minister. He died when Louis was 4 years old. At age 8 years, his widowed mother, Lula Tompkins Wright, married Dr. William Fletcher Penn, an Atlanta physician.

Louis attended Clark University in Atlanta, and then Harvard Medical School, from which he graduated fourth in his class in 1915. He completed an internship at Freedmens’ Hospital and then returned to Atlanta to practice medicine with his step-father.  There he founded with his stepfather and others, Atlanta’s NAACP chapter, and served as treasurer on the executive committee.  After service in World War I and re-starting his medical and surgical career in New York Citry, Wright, in 1935 at age 44, would become the first African American chairman of the NAACP Board of Directors, a voluntary position that he held until his death in 1952.

In 1919 Wright moved to New York City and became the first African American physician on the staff at Harlem Hospital. The white medical superintendent who appointed him was severely criticized and demoted, and several whites resigned in protest over his appointment. This did not detere Wright who continued to advance and in 1943 became the Director of Surgery at the institution and a well-respected medical leader in New York.

While serving in the Army Medical Corps during the First World War, he introduced intradermal vaccination for smallpox. In 1948 he was hailed as the first clinician to investigate  the treatment of  humans with Aureomycin.

Until his death in 1952, Dr. Wright was a relentless opponent of racial prejudice, discrimination, and injustice. He stood solidly in favor of a responsive, fully integrated Harlem Hospital, which he considered to be the social obligation of the city of New York to support. He stood equally firm in opposition to the social alternative of a privately funded, “charity” hospital which remove the need for the city to meet its obligations of integrating hospitals. He is especially remembered for his conviction that “what the Negro physician needs is equal opportunity for training and practice–no more, nor less.”